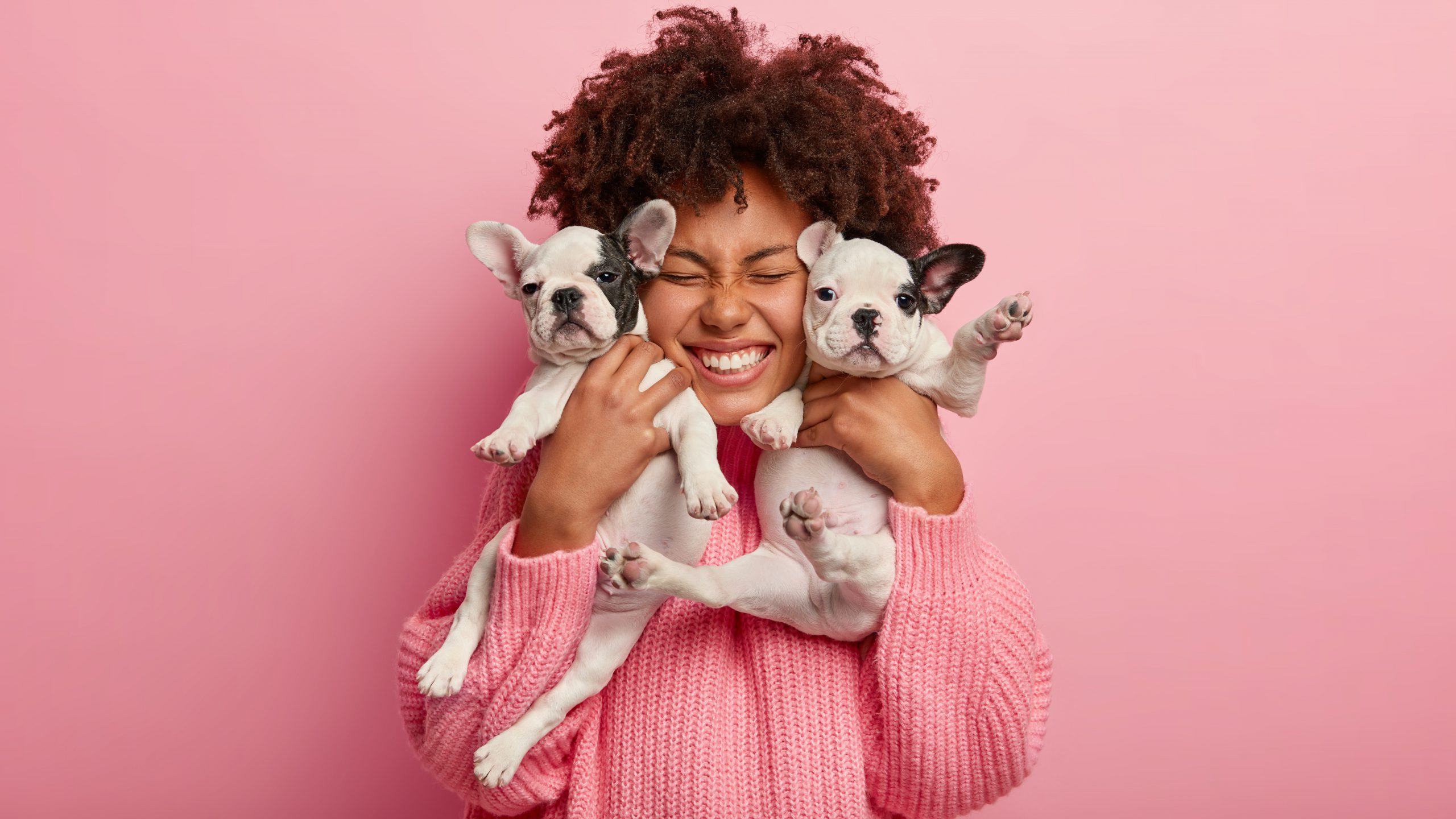 When training your puppy, remember that age matters. For the busy person, making the most of training means working with your puppy’s abilities at each stage of growth. Here is a general guideline of what to expect.

Birth to two weeks of age

At this stage, your puppy has a sense of touch and a sense of taste. That’s pretty much it. This stage is when your puppy will get what he needs from his mother and littermates. The tie he has with these outer stimuli is critical to his development and growth. This is why if a puppy doesn’t have a mother, he will be assigned a human surrogate.

Research has shown that the interactions of a pup at this stage are very important because they help with simple coordination, muscle building, social interaction, and the hierarchal system that dogs work with (more on this later!). Here is where dogs innately develop social skills with other animals. It is much like how a baby seemingly doesn’t do a whole lot when in the crib. In reality, though, the baby is processing millions of bits of information per minute. In fact, studies have shown that babies process much more information than we do as adults. The same can be said of a puppy at this stage.

Puppies aren’t “doing much” literally, but their little brains are on super-charge when it comes to learning about the world. That’s why it is so important for their mothers to get the proper nutrition (or for a surrogate to feed the puppy the right pup formula directly). It helps support the proper nutrients they need to do so much brain work. That brain-work is what will carry them through to adulthood and ensure their long-term quality of life.

A lot happens during this stage. Remember the “processing millions of bits of information per minute”? It’s still happening here. If you ever wondered why your puppy goes through his day and then passes out exhausted into a deep sleep, this is why. He is doing even more processing here based solely on the fact that he can walk and open his eyes. Just imagine having those abilities one day. You would probably want to spend as much time as possible looking around and marveling at the things around you. You would want to use those legs to get everywhere and see everything. This is the kind of wonderment your puppy is experiencing now and will experience for a few years’ time.

Your puppy will also start trying to bark and likely be successful at it during this point. He will start developing teeth, so this is the perfect time to start introducing solid food. At this point of his life, he is growing so quickly and profoundly that he likely isn’t going to get all his needed nutrients from his mother’s milk alone. Work with your veterinarian to find out the perfect additions to your pet’s diet, then introduce them slowly. The key with puppies is that “slow and steady wins the race,” remember? This is true with food, too! It is also true if you plan on changing your puppy’s (or even adult dog’s) food. Introduce it slowly so that his sensitive digestive system can adapt properly.

Four weeks to 12 weeks of age

This stage is as important as any of the others for your puppy. At four weeks, your puppy will start to eat some solid food. That means you can expect his activity to increase accordingly.

You will notice that your puppy is “on the run” more than ever. This is also a critical stage for your puppy to learn what is expected of him when he is around other animals. Likely he is still with his littermates, and this will do a lot for his training. Once your puppy reaches the five-week mark, he is starting to really process what is going on around him. This is why it is critical that he have one-on-one interaction with his owner, trainer, and other animals.

Research has shown that if you can give your puppy good experiences throughout his fifth to seventh weeks of life, it will carry on throughout his entire life. This is the foundation of who your dog will become, so treat it carefully. Most likely, part of this four-week to 12-week part of his life will be spent with the breeder, and at some point, the dog will transition to your care. (This stage is commonly referred to as the “transitional one” because of all the changes your puppy and you will undergo).

If your puppy is with his littermates throughout the majority of this time, you won’t have to worry about socializing. The moment you take full-time charge of your puppy, though, you want to have a socialization schedule ready for your pet. See the schedule chart for more information about this part of the training.

It is very important that throughout this stage, you introduce your puppy safely to as many outside influences as possible. This includes children, other animals, the elderly, the car, the park, the dog park, the veterinarian’s office, the pet store, etc. You want to be there as a comfort for your pet as he moves into these new environments.

Always take it slowly. Introducing one of these new places twice a week is a good schedule to start.

This part of your puppy’s growth can be equated to sending a child off to elementary school. Your puppy will be influenced by other puppies and people. He will also continue to find his place with respect to dominance and submission.

This is another critical time for your pup. Now that your dog is at the three-month mark, you can correct unwanted behavior. Let’s say you have a puppy that is showing strong signs of dominance at the dog park. Now is the time to start working with your pup, so he understands that this is not acceptable. It may be wise to start attending the dog park more often so that he can keep learning what he can and cannot do. On the other hand, if you have a puppy that is timider, you can start to introduce him to new things while staying by his side. This will give him the confidence of knowing that you’re there but that he is still alright with moving into the new environment or taking on the new person, dog or thing.

What is nice about this part of your dog’s life is that he is now learning based on the things around him. Recall how during the earlier stage, he was simply experiencing new things? Now your puppy knows what the new things are and just has to learn how to properly maneuver them. You can easily continue with correction here and start to help your dog develop the skills you want from him.

At this stage, he is old enough to remember corrections and the positive reinforcement you include during training. You must still train frequently, but you’ll notice much more retention, which is always a welcome result of your hard work. You will also have an idea about what works and what doesn’t with your pup. For example, some puppies are great at training early in the morning. They are ready to conquer the day and start. On the other hand, some puppies like to eat, poop, and nap in the mornings, and then around lunchtime, their high energy kicks in.

This is one of the most enjoyable things about having a pet—you slowly get to know his unique personality traits and start to appreciate them.

Six months to 18 months of age

At this stage of development, your puppy is like a tween or a teenager. He knows who is in his pack and has already developed habits.

Again, you can watch those habits and accentuate the good ones while training away from the bad ones. Understanding the pack formation, though, puts your dog at that point where he may be challenging your orders more. This is natural; you’ll find that your pup is still testing his dominant wings, so to speak. Your job is to effectively and calmly maintain your station as the leader to let your pup know that though he is bigger, he still must follow within (and not lead) the pack.

Now that you have spent half a year with your animal, you will have insights into what works and what doesn’t. Continue to explore these for your pet. You will also know his body schedule. Some puppies get their hyper-energy in the early evening, for example. This is a great time to stop your pup from destructive actions because he doesn’t know what to do with that energy. Rather, start training! Get your puppy used to channeling that energy into effective actions that will not only help him but will help you too.

We use cookies on our website to give you the most relevant experience by remembering your preferences and repeat visits. By clicking “Accept”, you consent to the use of ALL the cookies.
Cookie settingsACCEPT
Manage consent

This website uses cookies to improve your experience while you navigate through the website. Out of these, the cookies that are categorized as necessary are stored on your browser as they are essential for the working of basic functionalities of the website. We also use third-party cookies that help us analyze and understand how you use this website. These cookies will be stored in your browser only with your consent. You also have the option to opt-out of these cookies. But opting out of some of these cookies may affect your browsing experience.
Necessary Always Enabled
Necessary cookies are absolutely essential for the website to function properly. These cookies ensure basic functionalities and security features of the website, anonymously.
Functional
Functional cookies help to perform certain functionalities like sharing the content of the website on social media platforms, collect feedbacks, and other third-party features.
Performance
Performance cookies are used to understand and analyze the key performance indexes of the website which helps in delivering a better user experience for the visitors.
Analytics
Analytical cookies are used to understand how visitors interact with the website. These cookies help provide information on metrics the number of visitors, bounce rate, traffic source, etc.
Advertisement
Advertisement cookies are used to provide visitors with relevant ads and marketing campaigns. These cookies track visitors across websites and collect information to provide customized ads.
Others
Other uncategorized cookies are those that are being analyzed and have not been classified into a category as yet.
SAVE & ACCEPT